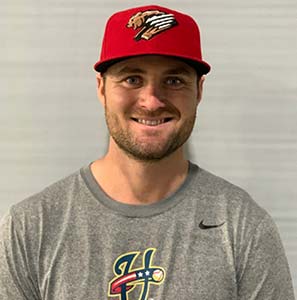 Dakota was born and raised in the Quad Cities. He attended Moline High School and graduated in 2009. After graduating from Moline, Bacus attended Southeastern Community College in Burlington Iowa from 2009-2011. In his two years there he was named to two straight all conference and all region selection. Finishing his college career at Indiana State University (2011-2012), he was named first team all conference and Newcomer of the Year. Bacus was drafted by the Oakland A’s in the 2012 Amateur Baseball Draft (9th round). Was traded a year later to the Nationals for Major Leaguer Kurt Suzuki. Has been invited to 2 Arizona Fall League, was named to the 2012 Fall League All-Star team. He is currently known as the “WHITE WALL NINJA” (google it)

Legends is blessed to have Bacus on the staff as he brings a lot of energy and knowledge to his lessons.